The cyclone that changed the course of history 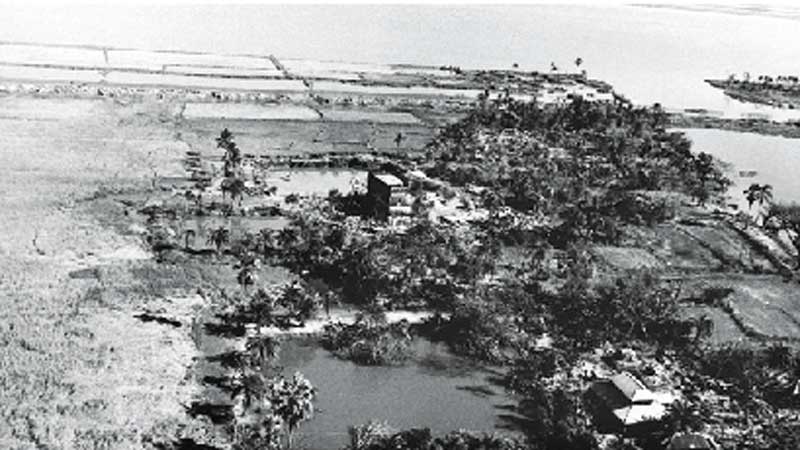 “November 12, 1970. No one would ever forget it. Two hundred and fifty miles of coastline on the Bay of Bengal was devastated, a huge V chewed out of the side of the country. Homes, crops, cattle and poultry, everything blown or washed away. To where? It was impossible to say. Though I imagined this place, somewhere to the north, butted up against the Himalayas, where the wind and waves had died down, and a massive pile of wood and metal, clothes, shoes, steel pots, pans, broken dishes, bodies of chickens and cows and goats, family photos, jewellery, school projects and notebooks, dolls, diapers and every single edible thing in the country lay. Cemented together by that distinctive silt that was the soil of East Pakistan.”

- From ‘This Innocent Corner’

The deadliest tropical cyclone in world history hit the coast of what is now Bangladesh in the middle of the night nearly forty-five years ago on November 12, 1970.  It is estimated that up to half a million people died.  No one really knows how many – records were not reliable, if they existed at all, and with that huge number of deaths, burial of the bodies was more important than identification and record-keeping.  However, the death toll was most certainly ridiculously miscalculated by the government whose first official estimate was 50 dead.
In total, nearly 3.6 million people were affected by the cyclone.

The tropical cyclone which had no name is now often referred to as the 1970 Bhola Cyclone (named after the coastal district which was directly in the storm’s path).  The storm sustained winds of 185 km/h – “sustained” means as measured over the course of three minutes – and therefore, is designated a “Category 3” storm.

There was an early warning system in place.  Meteorologists knew about the storm, and the fact that it was intensifying as it approached the coast.  However, the warnings on radio were restricted to the usual weather reports.  Regular programming was not interrupted.

One reason was a much smaller cyclone that hit the coast on October 23, a mere three weeks earlier.  Radio programming had been interrupted, at-risk areas had been evacuated, and in the end, the storm did not hit with the force that was expected, and only 300 people died.  The authorities probably did not want to repeat this experience.  According to other accounts, the authorities believed everyone had already taken shelter, including the fishermen in the Bay of Bengal, and there was no need to issue further warnings.

Bangabandhu Sheikh Mujibur Rahman, who was running for office in the general election that was scheduled for early December that year, toured the devastated region.  When the Awami League leader returned to Dhaka, he said at a press conference: “I cannot find words adequate to describe the holocaust which the cyclone and tidal bore have left in their trail.  Nor can I adequately convey in words the suffering and the misery of those who have survived.  Whole areas have been totally depopulated.  In many areas of Patuakhali, Bhola and Noakhali barely 20 to 25 per cent of the total population has survived.  The survivors have lost their homes, their crops, their cattle; in fact they have lost all their worldly belongings.  They are without clothes, without shelter and in many of the areas without any food or drinking water.  The wounds on their bodies are turning septic.  They face death from starvation, exposure and disease.”

Most of the dead were believed to have been women and children.  They could not hold onto trees and buildings when the wall of a wave, the storm surge, hit them.

Relief efforts were slow for so many tragic reasons.  Bodies were not buried quickly enough.  Cholera and other diseases broke out.  People ate tree roots and drank water from ponds in which corpses were rotting because they had no other choice.

Still, the 1970 cyclone may have changed the course of history.  At that time, Bangladesh was the eastern wing of Pakistan, divided geographically by India.  However, the people of East Pakistan had been struggling to achieve some level of autonomy, believing it was not just geography that separated them from West Pakistan. The administration in Islamabad controlled the country, and set policies that favoured west over east.

When the government response to the cyclone was so slow and inadequate, people’s beliefs against the west were reinforced. As a result, Awami League won a stunning victory and emerged as the single majority party in the national assembly, with Sheikh Mujibur Rahman as the prime minister-elect. This eventually led to political crisis and the Liberation War in 1971.

Today, the country is still struck by cyclonic storms from a season that lasts from May to November.  The most recent devastating cyclonic storm was in November 2007.  Cyclone Sidr was a Category 5 storm that is estimated by several international development agencies to have killed up to 10,000 people.  But it is a far cry from the number of dead and amount of destruction that would have occurred had cyclone preparedness not improved as much as it has since 1970.  Though the damage done in that storm should not be underestimated, Oxfam estimates 100,000 people’s lives were saved because of improvements to cyclone preparedness in the country.

In the decades since the Bhola Cyclone, the early warning system has been recast and upgraded many times, and as new technologies become available, preparedness is under steady reform.  It consists of everything from new forecasting devices for meteorologists, to an emergency action plan carried out by the country’s national radio broadcaster, to texting (!), to a flagging system, even to a cadre of women with megaphones who will spread the word.
Cyclone shelters can be seen all over the country near the coastline.  Many of them mushroomed up in the years that I lived in Bangladesh.  The easy availability of the shelters was a great help.

I was very surprised in reading about cyclones to find that there remain questions about their exact cause.  Though there are six certain conditions that may lead to a cyclone, many related to ocean temperatures, prevailing winds and other meteorological factors, the operative word here is “may.”  Cyclonic storms still appear where none of those conditions appear to exist.

Another of the dramatic cyclones in Bangladeshi history took place in October 1942 when 40,000 people were killed.  My grandfather, John Herring, with the Royal Air Force, was posted to Bengal at that time.  He took several photos from the banks of the Hooghly River.  It’s heart-breaking to see the dead like that and I wonder how my grandfather dealt with it.

The writer worked as a UN volunteer and communications consultant in Dhaka in the 1990s. She is the author of This Innocent Corner.

This article was first published in her blog thisinnocentcorner.wordpress.com.

The cyclone that changed the course of history 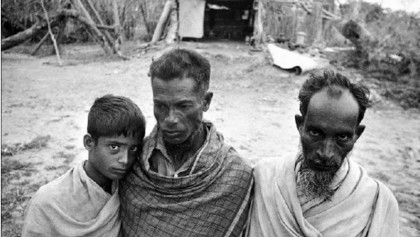 Remembering Bhola Bangladesh, due to its unique geographical location, suffers from devastating tropical cyclones frequently. In the 20th century, seven of the nine most deadly natural disasters in the…

Recalling the Super Cyclone of 1970
The Great Bhola Cyclone