October 18 is Sheikh Russel’s birthday. What a beautiful boy Russel was! He was adorable to everyone. He might have become a remarkable man with the passage of time. Wiping out Bangabandhu’s family bloodline including Sheikh Russel in 1975 was one of the cruelest acts in the world.
Farhad Hossain, MP and Sheikh Masud Kamal

It is not easy to come up with the right words to express our sorrow and convey our condolences to the surviving sisters, Prime Minister Sheikh Hasina and her younger sister Sheikh Rehana, who have lost their 10 years old youngest brother, Sheikh Russel. It is an irreplaceable loss for them.

'What did my younger brother do that they had to kill him?' Prime Minister Sheikh Hasina asks and remembers her loving younger brother whenever she talks about the shameless killing in 1975.

Sheikh Russel, Bangabandhu's youngest son, was born in Dhaka on 18 October 1964. At the time of his death, Russel was a student of class four at Dhaka University Laboratory School. Russell did not get much of his father due to his father’s political activities that sent him to jail frequently. It is learnt that his house tutor Gitali said, ‘The kid had sympathy for the poor. He used to give away gifts as donations. Whenever he found any poor being cheated, he would take him to his father and complained’.

On 15 August 1975, Russel pleaded to be taken to his mother, not knowing she had already been killed. The killers made him walk past the bodies of his close ones. Finally, when he confronted his mother's body in the lobby, he burst into tears. Then he said, ‘take me to Hasu Apa’. At that time Sheikh Hasina and her younger sister Sheikh Rehana were abroad. That means Russel possibly thought he would survive if he could go abroad to his sisters. But, instead of having a little mercy on an innocent boy they shot him. He was the last person to be killed on that dark night along with his parents and other family members at the residence of Dhanmondhi 32.

Razia Matin Chowdhury, the Principal of University Laboratory School, in a memoir said, ‘Russel, the most kind-hearted little boy, that I have ever had the pleasure of teaching. He loved to make everyone laugh. He will be missed by all his classmates. Many of his teachers said, Russel had the biggest heart of any boy they have ever come across’. As his teachers mentioned, Russel cared about everybody and he was loved by everyone at school. Not a single day would go by where he would not glorify his school.
Bangabandhu was a great fan of the eminent thinker and philosopher Bertrand Russell and when he was imprisoned, he spent his time reading the books of Bertrand Russell. As such he named his youngest son Russel after the name of this great philosopher.

The tragic incident led to his death stunned the entire country. The brutal killing has left us speechless. The same has been happening in different forms on the globe during these decades which is not acceptable. John Donne, English poet wrote aptly, ‘Death diminishes me, because I am involved in mankind.’ Like Russel many other little boys and girls, who are free from evil or guilt, are being slaughtered even today.

What a beautiful boy, Russel was! He was adorable to everyone. He might have become a remarkable man with the passage of time. Wiping out Bangabandhu’s family bloodline including Sheikh Russel in 1975, was one of the cruelest acts in the world. The conspirators did not show any mercy and did not spare his life.

The nation reproaches the heinous act of assassination of Father of the Nation Bangabandhu Sheikh Mujibur Rahman and most of his family members including little boy Sheikh Russel. Death cannot take Russel away from the memory of his surviving sisters Prime Minister Sheikh Hasina, and Sheikh Rehana. He will be remembered by them and us as well. He will be in our mind always. We pray for the innocent soul.

Where is the solution to the Rohingya crisis? 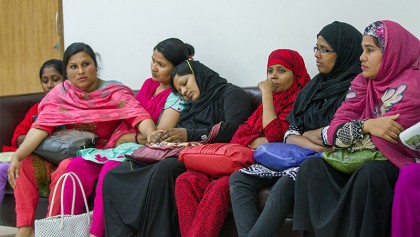 In recent times, especially since the outbreak of the Covid-19 pandemic, remittances sent by Bangladeshi migrant workers to the country have been making a significant contribution to the country's economic recovery. At present…

The new health concern is Omicron

Students losing their lives due to mismanagement of road traffic law

Motivation, the true essence of life

Turkey and Bangladesh can benefit from growing trade and strategic ties